Review Who are the 15 most followed Youtubers in Spain (2022). Cancel reply 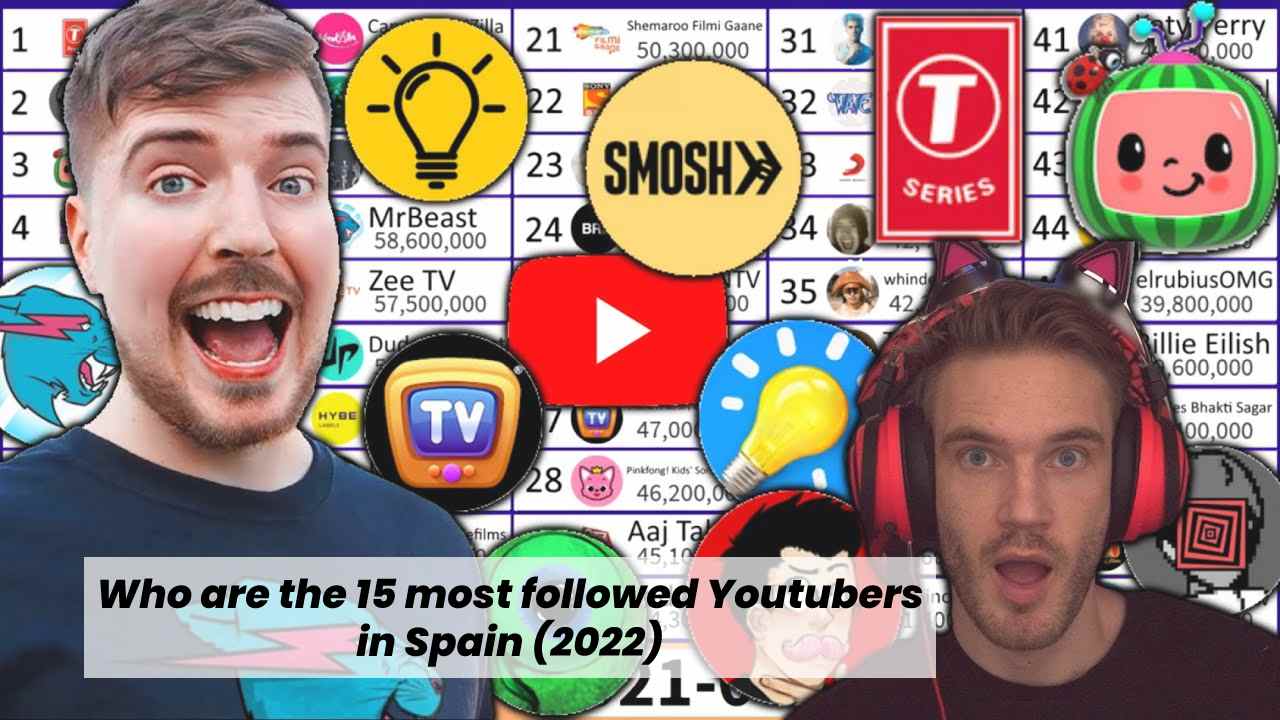 Youtubers in Spain – When we talk about the figure of the YouTuber, we do it about a new role that dedicates its activity to uploading videos on various topics, dragging millions of followers with them. It is not surprising, Since, that many of these YouTube kings earn scandalous figures through their videos, thus transforming fun into a profession, or that large advertising brands pay attention to them to take their message wherever it goes, especially among the younger people.

And in Spain? Who are these most-followed YouTubers in Spain? Every year we update our ranking with the 15 YouTubers with the greatest projection, and the largest number of followers and views in our country, and this year could not be the exception. Here is our renewed list as of 02/7/2022. Will there be a lot of news?

Top 15 of the most followed YouTubers in Spain

According to data from  SocialBlade, he is still the one who tops the list of the most followed YouTubers in Spain! We are talking, of course, about elrubiusOMG, a boy born in Mijas in 1990 who has become famous through his gameplay videos (indie, horror, funny, etc). Attention to the data! It currently has 40.4 million subscribers (around 900,000 more than last year) and more than 7.36 billion cumulative views. It is number 1 in Spain and one of the first worldwide for a reason.

And in position number 2, another familiar face remains in the same position as last year with 32.9 million subscribers this year and 14,617,892,880 views. We are talking about VEGETTA777,  a well-known boy from Madrid on whose YouTube channel he shows gameplays of various games such as  Minecraft, GTA V and Far Cry 4.

Mikecrack, Mike, Maik and Minecraft are the same person and they star in this YouTube channel, which continues to climb the ranks. In 2020 it had gone from position 18 to 8 in our ranking, in 2021 it rose from 8th to 5th with 22 million followers (almost 9 million more) and more than 8,000 million views and now in 2022 it occupies the third box with 30.3 million subscribers and 12.326 million views. Minecraft, but also videos from series like  No One Lives Here,  El Noob Ambrozzio, and many other  PVP  and  Roleplay series,  with guaranteed fun.

This Catalan  YouTuber rose to fame with the video “Big Brother VIP”  and is currently known for his “video-criticisms” of other YouTubers, for his comic videos or small humorous analyzes of what is on the network. This year it seems that his fame has increased. It has gone from 27 million to 28.9 million subscribers and has more than 3.8 billion views. Here you have it!

And in a Top 15 starring mostly YouTubers gamers, it is striking that our next protagonists are still in the Top 5. Las Ratitas , two sisters who like to play and share adventures. Their online presence has not been without controversy, but the truth is that they have  24.1 million followers (2 million more than last year) and 8,955,772,661 views.

The WillyRex  is one of the YouTube channels of Guillermo Díaz,  another of the great Spanish youtubers  who focuses his activity on the world of video games (you can see, among others,  Minecraft  or  Clash Royale ). It remains in sixth place on the list compared to last year, while its community of followers rises from 18.5 to 18.6 million subscribers, with a total of views on its videos that now reaches 6,921,170,200.

Another one that remains in the same position that it occupied in the 2021 list is TheGrefg, who after having experienced a rise from the 10th position that he obtained in 2020 to the 7th position last year, continues in that same box this 2022. You will see that he focuses in content about video games and various crazy things ,  and is already reaching 17.4 million subscribers and more than 5.8 million views.

If in position number 6 we had The WillyRex, number 9 repeats the protagonist. This is Willyrex,  Guillermo Díaz’s other channel, with  17.1 million followers (increases by just over a million compared to last year’s ranking) and 4,705,060,761 views.

In tenth place we have Doggy Doggy Cartoons ,  a channel for the smallest of the house with cartoons made with Play-Doh , as well as fun stop motion movies. Not everything is going to be video games, right?! It currently accumulates 16.8 million subscribers in total and 6,420 million views.

It dropped two places, but Makiman131 , a channel with  gameplays of  Call Of Duty, Minecraft ,  and in general crazy videos or parodies, continues to be among the most viewed in Spain with 14.8 million followers and more than 4,000 million views. Here you have it!

Defined as  “your channel to be happy” , the  iTownGamePlay channel repeats many of the patterns seen in the previous channels: very young YouTubers with videos that always revolve around video games, memes, music… But even so, it drops down a couple of seats to position itself at number 13 after being 11 in 2021, with 14.2 million followers and more than 4.5 billion views.

It is nothing new. The  FC Barcelona YouTube account  has been climbing positions in our ranking in recent years, above the Real Madrid CF account. This year it rises to 14th place with an audience of  13 million followers (3 million more than in 2021) and 2,026,962,854 views  (a figure also notably higher than last year).